So I started a nice little detox.

I went through my following list, cleared out accounts that weren’t being updated or if I couldn’t remember who someone was, and/or wasn’t interested in reading their tweets. Things like promo accounts for shows or movies from years ago were unfollowed. I’m down to 523 that I’m following but didn’t finish the clear out it – it’s on my May to-do list to finish doing that.

I also created lists – so I could see celeb updates separately from real people, meaning I wouldn’t miss things. I ended up with about 20 different lists for different types of accounts I was following – Stargate, Books, Cons/Events/Happenings, Music, Actors, Useful Real Life Stuff, HEARTEYES, Fandom, Real People are some examples.

Twitter feels like a much less stressful place and I’m enjoying actually being able to interact with people again. So yay, success!

I’m really stressed out with work at the moment and it’s starting to have a negative impact on my depression. Combine that with a couple of weeks of shenanigans where my sleep pattern and med schedule got messed up, I had some really high highs and a couple low lows and… yeah, I’m mentally all over the place. I’ve fallen behind in housework and I’m not cooking or eating properly. I’m really glad of this long weekend to hopefully try and recharge. I’d like to get my kitchen cleaned, change my bedding and organise the chairdrobe but honestly, if all I do is just destress, then that’s perfectly fine because I need it.

And so, I need a little happy place right now. A little list of what makes me happy. My happy things. A list that doesn’t involve yoga or candles or any of the other generic self-care prompts that float around:

1. Going to bed and knowing I don’t have an alarm set in the morning
2. Having a hot bath, putting on warm & clean pjs and getting into a freshly made bed with clean bedding
3. Watching Stargate
4. Raintown gigs – with a side order of Paul’s hugs
5. TLOR gigs… and Riley greeting me by name with a kiss and a hug.
6. When I’m writing and the words flow just right
7. Losing myself in a good story for hours – regardless of whether it’s original fic or fanfic
8. The ability to download TV shows and movies and books and music
9. Spotify
10. Going to the zoo
11. Caramel hot chocolate
12. WINGS
13. My living room. The colours! Being surrounded by my books and my DVDs.
14. Curling up on my couch with a wordsearch
15. Getting a massage
16. Go for a walk in the park
17. Cherry Pepsi Max & Raisin Biscuit Yorkies
18. New stationery
19. Forced orgasms in bondage
20. Amanda Tapping, when she smiles and hugs me and kisses me and tells me I’m beautiful

I think the people I work with still think of ‘geek’ as being a negative thing. The majority of them are a good couple of decades older than me so to them, a geek is still that socially inept person that gets picked on. But to me, geek is exactly who I am. My dictionary defines it as

noun – a knowledgeable and obsessive enthusiast.
verb – be or become extremely excited or enthusiastic about a subject, typically one of specialist or minority interest.

and, HI! You’ve met me. I’m a very excitable enthusiastic llama about the things I love and a lot of those things aren’t the ‘social norms’. Like you won’t see me watching soap operas or reality tv or listening to pop music – but give me my sci-fi or Raintown and just watch me go *grins*

So yes, I quite happily accept geek as a personal adjective. It’s up there with fangirl (although I think geek and fangirl are pretty interchangeable really), music-lover, bibliophile (although I’ve not read anywhere near enough this year and am hoping to do something about that going forward) and writer (again, need to work on that!). I’m also an internet addict, a Hufflepuff, a blogger, a list-maker, a slasher, a history buff, a gig-enthusiast, I love to travel. Although I would say the top five I use most – and the way it’s on my bio is:
Hi, I’m Cassie. I am a 36-year-old English fangirl, music lover, bibliophile, writer, Hufflepuff, slasher and a geek.

When we were talking about it, I found it interesting that they described/defined themselves by their age, their job and their relationships to others – their husbands and their children.
And one of the things I’ve been working on is to focus on using the things I love. I mean, I could say I’m a 36-year-old orphan who works as a purchase ledger clerk and has depression – but that doesn’t tell you anything about ME, about what I love and enjoy doing.

I opened up this ‘write a post’ box to talk about how I’d started working on a revamp of this blog… but then Spotify interrupted me by playing some music I haven’t heard in forever and making me squee.

I was listening to my Discover Weekly playlist and on came Mona by Craig McLachlan and I’ve probably not heard that song in… god, 15 years if not more? But I still knew all the words, still remembered dancing around my bedroom age like 8, singing into a hairbrush.

And if that wasn’t enough, it playing PJ & Duncan – Let’s Get Ready To Rhumble. Yup, still know the words to that too. I also checked and both Psyche and Top Katz are on Spotify so they’ve been saved into a playlist to listen to later.

Then… THEN! Because I wasn’t squeeful enough! Def Leppard – When Love & Hate Collide. Which, hello! Since when have Def Leppard been on streaming? Oh, since today! So now I’ve queued up Vault and I’m singing my heart out to Lets Get Rocked. I’ve also got Retro Active queued up after. SO. MUCH. LOVE.

Right, what was I saying? Ah, yes. Website revamp. I’ve got a new layout up and I’ve re-written my about me page. I’ve also re-written my bio on my profile page of my livejournal and my dreamwidth, as well as updated/tidied up my interests. I’m quite happy with their layouts still though so that won’t be changing.

I also need to decide what to do with LJ because damnit only having 6 icons is killing me but… I don’t really want to give them money. What to do, what to do?

For now, I think it’s time to become one with my duvet, Stephen King’s Misery and more Def Leppard!
*sings* Love is like a bomb, baby, c’mon get it on
Livin’ like a lover with a radar phone
Lookin’ like a tramp, like a video vamp
Demolition woman, can I be your man?
Razzle ‘n’ a dazzle ‘n’ a flash a little light
Television lover, baby, go all night
Sometime, anytime, sugar me sweet
Little miss ah innocent sugar me, yeah

My flight on Wednesday ended up getting cancelled – there was a problem with the plane and after working on it for most of the afternoon/evening, 4 or so hours after we were due to fly, they cancelled the flight. Aer Lingus put us up in a hotel (Crowne Plaza, nice, thank you), fed us and we flew home the following afternoon.

They had some difficulty finding me a flight from Dublin back to Birmingham (apparently Birmingham is a super mythical place where no planes go) and I ended up being checked in really late and was given a seat in row 40. Which with crutches is super awesome, y’know? And I was stiff as it was.

The flight crew were awesome, took one look at me hobbling onto the plane, looked at my ticket and moved me to an empty seat in row 12. I actually ended up with both seats to myself.

Unfortunately, I then had an allergic reaction to my meal. My specially booked meal that was supposed to have nothing I’m allergic to in it. Super! I didn’t taste peppers/chillis but the rice tasted… not quite right so I didn’t eat a whole lot of it. About 30 minutes later? My stomach cramps and I just about make it to the plane toilet before violently emptying out of both ends and almost passing out. We’re talking ‘they had to put the toilet out of order’ levels of ill. Not fun.
Took allergy meds, started feeling better maybe 15 minutes later and the flight crew were super in checking in on me the rest of the flight home.

I should have got back to Birmingham at like 5pm on Thursday, got back at 12pm on Friday. The wheelchair assistance guy actually took me all the way to the platform to get my train, a complete stranger wheeled my suitcase to my taxi and the taxi driver carried my suitcase up to my flat. People are awesome. I was completely exhausted and ended up napping for about 2 hours. Woke up, ordered pizza. Went to bed about 10, slept HARD, woke up convinced it was about 3 – and it was like 1. I fell asleep again around 7am on Saturday morning, woke up Saturday lunchtime. Didn’t actually get out off bed.

I think it was a combination of jetlag, finally coming down with the crud I’ve been fighting off the last couple weeks and a depression hit since I’d missed my meds effectively on Weds, Thurs and Fri. Yeah, not so good. The crash has not been fun

I got to sleep around 10:30 last night, slept til about 4. Futzed around for a bit, went back to sleep around 7:30 and woke up at 10. I actually made it out of the house and got to Tesco. I changed the last of my dollars back, got some groceries and am now on my couch watching Netflix. I’d intended on doing shit around the house, setting up my bujo for 2018 but honestly? I don’t think I have it in me. I’m still wiped so I’m gonna Netflix and chill for the rest of the day. Just started watching The Night Shift after a few recommendations and I am in love.

Tonight I need to try and get sleep schedule sorted because tomorrow is Monday and there is work. BOO! 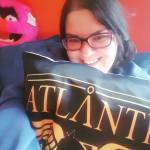 Hi, I’m Cassie. I’m six foot ten and have bright orange horns that glow in the dark. I speak fluent sarcasm, fangirl and several dialects of snark. I originated on a planet in the Pegasus galaxy, and was rescued from a life of boredom by a flyboy in a puddle jumper. I have an attraction to pretty women with heart shattering smiles and I like to follow random musicians around the UK.

5 fandom friday 30 days of llama 101 Things In 1001 Days 642 things to write about: young writer's edition a day in the life blogging books cassie is a geek concerts fanfiction goals health life movies & tv music recipe site Uncategorized work
Back to top
This is who I am…
Create a free website or blog at WordPress.com.
Loading Comments...
Comment
×